Crossposting from Dreamwidth isn't working all that well these days. So, it may be time to turn it off. I haven't been ready to pull the plug for a long time, as I've been with LJ since 2002.

In the meantime, only some entries are being posted here, not all.

This is a test.

Went to see the Book of Mormon last night. Ended up staying for the whole show, although beforehand I thought I might leave because I was so tired. I'm going in to work for 10am. Glad I made the decision to go in later, because the drive home last night was brutal and there was no way I would have been able to drive to work on four hours of sleep.

The show was really quite something. I had no idea. I have to say - it is very clear that a hell of a lot of work went into that show. I was dubious about show at intermission, although there had been some good songs. But the 2nd half really tied it all together. Really quite something.

There was such hard work and artistry going on last night -- I had no idea that there was going to be such physical comedy going on. So glad I went to see it. I don't have the heart of a cynic, so perhaps I missed things, but in the end what I experienced was that this was a love letter to the Mormon church. However, the message of this love letter was very modern "idea not dogma" (see Chris Rock in the movie Dogma). I also didn't expect that a large part of this story would be about the growth of these kids into men. I really appreciated that the Ugandan villagers were not reduced to stereotypes - this was so amazing to me.

I spent about a half hour winding down watching Book of Mormon before I went to bed.

I'm not going to any Women's Marches, but I'm there in Spirit.

I'm pretty proud of myself, although it's very hard to try to muster up the "proud of myself" feeling. I've just now made my lunches for this week. Blue Apron taught me some very new recipes and introduced me to some new foods that I loved, one of which was Korean tteok, which is a kind of chewy food made of rice flour. In this recipe, it's used like a pasta. Most importantly, I was able to eat it and digest it. 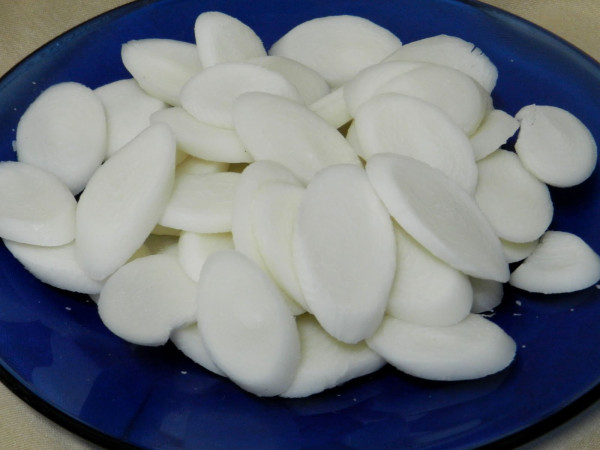 The recipe itself is located here and looks like this, which is essentially how it came out for me except that I didn't take that kind of care with the scallions: 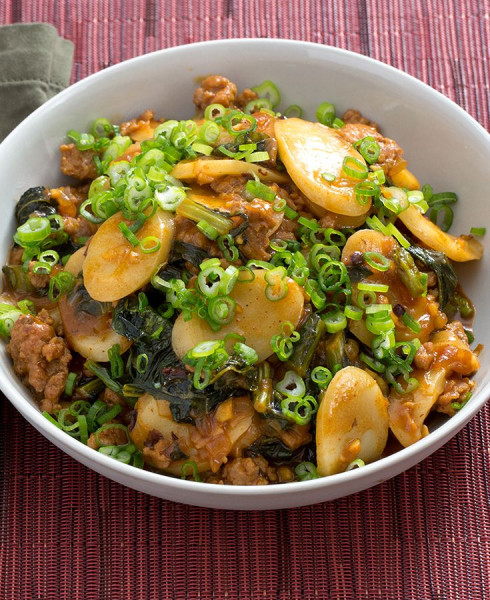 My version had beef because it was closest and I saw no ground pork anywhere and I wasn't about to go another store. I used Hoisin instead of sweet soy sauce, so the recipe is slightly less sweet. Totally forgot the sour cream, but that's fine. No gochujang paste because it's too hot for me.

I tripled the recipe and it tastes Great. I am looking forward to lunches.

First, something called "Grandma's Sunshine Salad". It is Lemon Jello plus pineapple and carrots.

Lemon jello + water, lemon juice, a little salt and a can of crushed pineapple. Then, you're supposed to let it gel slowly in the fridge until it is thick enough to hold a suspension of carrots. I don't have all day to sit around and babysit Jello, so I put it in the freezer for the first gelling. It is now all finished and in the container, waiting for tomorrow. I did not use the traditional glass dish. NOPE. I bought disposable containers so that I can leave them there.

This one is officially called a Cranberry-Walnut Salad, but the name doesn't quite cover all of the flavors in this. Start with a base of Cherry Jello + water. Add in whole-berry cranberry sauce plus the chopped pulp of two oranges. Then, you're supposed to wait until it gels slightly, so I put it into the freezer with the other one. When the mixture is thick enough to hold the heavier pieces, I have now folded in the diced apple and walnuts and it is sitting in the fridge waiting for tomorrow. Right now, it really tastes fantastic. I am surprised at how good that accidentally tasted. I'm tempted to actually eat some of this tomorrow.

Meatballs, into the oven!

I love cooking for other people.

I'm up and I've already fed Tater Tot. Alice and Henry did not finish their food from last night, so No Food For You.

Amongst the presents that my Dad dropped off yesterday was a very tiny cat bed. I think it might be too small for Henry unless he curls himself into a very tight ball. I did see him get into it yesterday, turn around a bunch of times and then get back out. But I think it was more about preventing Alice from getting into it than wanting to sleep. Alice is only 5lbs and this is actually the perfect size for her.

I am having trouble keeping up mineral levels for things like calcium, iron, etc. Multivitamins aren't cuttting it. So, I've started drinking herbal infusions, where you pour boiling water over an ounce of dried herbs and let that infuse for four or more hours. You then strain out the plant remnants and drink.

The newest plant to work into the rotation is Chickweed. I can report that Infusion of Chickweed is a dark amber-colored tea that has wonderful top notes of fresh lawn clipping, a broad taste trail of decaying autumn leaf, and a savory finish of rain-soaked wooden stick.

Well, I did it. Pushed myself out into the universe a little more.

Back in roughly September, with significant help, I launched an organic and natural foods buying club. I called it Groundhog Naturals because Groundhog Day, aka Imbolc, is my favorite holiday. This is when spring truly starts to walk around, when we're able to start to seeing the difference in light. It was my absolute favorite time of the year in Florida because it was when the trees started turning green again. The only thing I like about February in Connecticut is that the light begins to visibly return when we reach February.

There are three actively-ordering members of the club right now and I'm ready to expand. It's time to spread the word now that I've worked out some processes.

I called the Glastonbury Citizen today and placed an ad in the Rivereast Bulletin. The latter is a free publication that with a circulation of lots. It covers my general area - in fact, for my town and the little towns around me, it's the only paper. For $18, I put in a classified ad for two weeks in the Rivereast for Groundhog Naturals. Next time I buy a classified, I'll go with both papers, but this was a good start with my limited budget.

People quite literally comb over these two papers - the Citizen and the Rivereast, as they are called. So at least a few people will see my little ad. Not sure where it will go in the paper, but it was deemed completely acceptable by the lady.

Wholesale discounts on organic and natural foods and products. Join the Groundhog Naturals Buying Club at groundhognaturals.com or call Marlene at 860-xxx-xxxx.